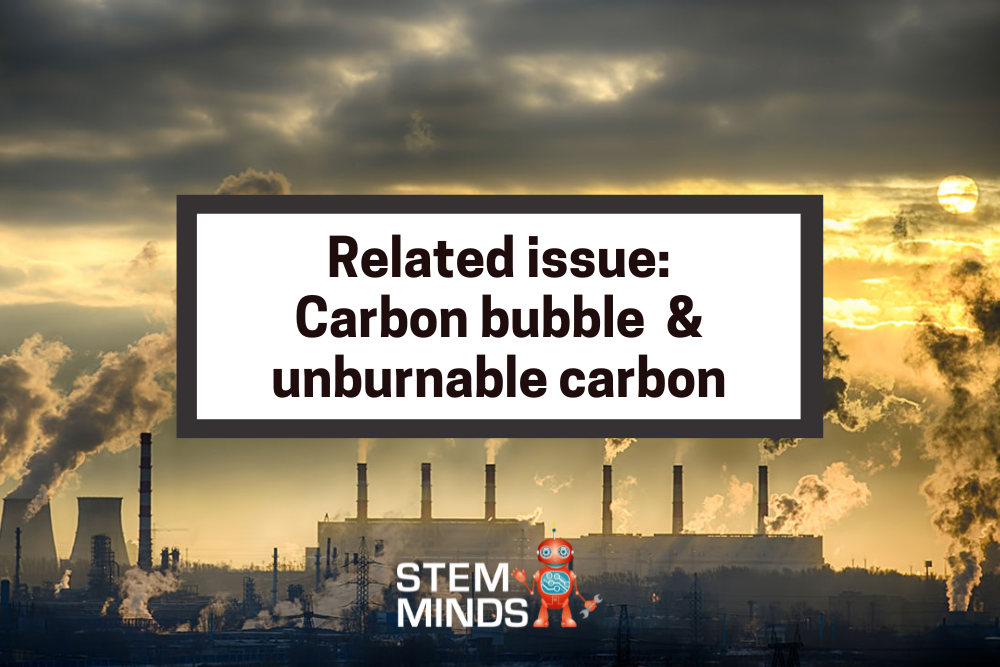 As you may recall in my other blog I talked about avoiding warming of 2 degrees large amounts of fossil fuels would have to remain in the ground.  As such, that means fossil fuel companies will not be able to burn much of their reserves. In theory, carbon capture would allow for the burning of a bit more fossil fuels for some time, but as of now the technology still needs development. Morso this would only apply to energy plants, carbon capture is not practical once the carbon is already in the atmosphere. So things like cars, still could not use gas. As of now, these unusable reserves are counted towards the company’s value. The theory behind the carbon bubble is that as the world moves to a low-carbon economy, these reserves would become worthless, as they could not be used or would not be profitable in the world. Thus the value of these fossil fuel companies (and whatever depends on them) would plummet, investors would take a hit, and people in these large industries would lose their jobs.  Countries whose economy is largely fossil fuel-based will also suffer.  That is what would happen when this bubble “popped”.

One way to prevent the bubble from bursting would be to not move to a low carbon economy. But given the moral, social, environmental, and even economic implications of climate change, that would be a horrible idea.  As such this makes a case for countries to transition away from fossil fuels and make their economies more diverse and less dependent on a single industry.   That way even if the fossil fuel industry is affected, the economy is still standing strong. Morso, if you recall my previous blog on electrification and decarbonization of the grid, this is another reason in support of the concept. If industries are not powered by fossil fuels, their decline does not affect them. Investors play a role as well if they pull their funds out of fossil fuels and put them into energy transition investments. Since this may not be immediately profitable, policy of some sort should be put into place to encourage this kind of investment. The most tricky part of this whole carbon bubble is the jobs that will be lost. Depending on how much a country initially relied on polluting industries, they actually may not lose more jobs than they will gain from a low-carbon transition.  Regardless, reskilling and worker compensation would have to be worked into any sort of low-carbon transition.

Arguably, even if there was no economically sound way to deflate the bubble, the low carbon transition should still go ahead. The extremely high social/ecological cost, of climate change, makes the economy a moot point. After all, what’s the point of an economy, if it doesn’t support society’s well-being and wipes countless species off the face of the earth for good?