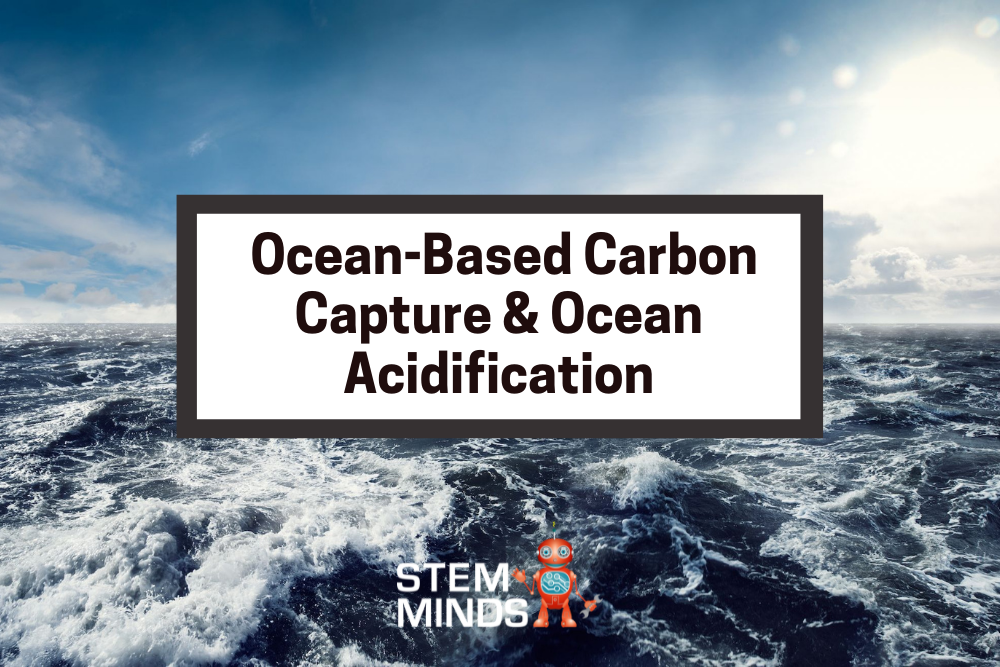 One way to solve the carbon dioxide issue lies in the very thing affected by it, the ocean. 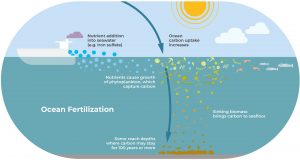 These solutions tend to use the power of photosynthesis to capture CO2. Such solution is not very technical but involves restoring coastal and marine ecosystems, which if done right, has to potential to remove a few hundred million tons of CO2 a year(but this is not nearly enough for what we need to do). Supporting these ecosystems is a boon for biodiversity, and they also help fight erosion, improve water quality, and support livelihoods like fishing.  While the solution is not technological in itself, tech can be used to help restore these ecosystems(check out one of my older blogs to see how).

Another method is iron fertilization, a type of geoengineering that involves adding iron to the ocean to cause rapid phytoplankton growth.

This plankton would absorb atmospheric CO2, as they grow.  when they die, they would sink to the ocean floor trapping the CO2 with them. In theory, this could store alot of CO2. But the potential for harm is great, as it could lead to toxic algal blooms, which reduce oxygen levels. These blooms could also block sunlight which would have its own effect on marine life. This would be devastating if it happened on a large scale. In addition, increasing the population of phytoplankton would upset the balance of the marine ecosystem.  This technology remains largely theoretical, as there has been little experimentation done due to the risk. Iron fertilization, like many other methods of geoengineering, has great risks, making it an unpreferable solution.  This is why the UN has put a global moratorium on geoengineering as of 2016. But as climate change worsens due to inaction, we may have no choice but to go with drastic measures.

The main chemical solution, alkalinity enhancement, involves adding different alkaline minerals to the ocean, to react with dissolved carbon dioxide and turn it into dissolved bicarbonates.  This will make less carbon dioxide available to bond with the ocean water, and subsequently, make the ocean less acidic. As an added boon, it would also allow the ocean to absorb more CO2 with less of an impact, because some of the carbon dioxides are being bonded with minerals instead of ocean water. If electrochemical weathering was used to increase alkalinity, a byproduct would be hydrogen (a green fuel). But like iron fertilization, the effects this would have on the marine ecosystem are unknown.

Also, some minerals would release things like iron and silica, both of which could cause phytoplankton blooms (which could be both a good and bad thing). Another concern with this method is that many alkaline materials contain small amounts of heavy metals, which could accumulate in food chains if this was done on scale. There is of course the environmental damage that comes from mining and the large amount of energy required to process the minerals.  In theory, this method could remove billions of tons of CO2 a year. It is estimated that this would cost 70-160$ to remove a ton of CO2, depending on the method. But a net cost of 3$ per ton may be achieved if the methods are used to produce hydrogen as a byproduct. However, this whole thing is largely in theory and has yet to be put into practice.

Some methods involve using electricity to accelerate chemical reactions that store carbon. One of which involves calcium and magnesium ions which are abundant in seawater. When these ions react with the carbon dioxide, they form calcite or magnesite (both carbonate rocks). Scientists have found that running seawater through the electrically charged mesh uses electrolysis. This process would work through a water treatment like plant in which water would come in, the reaction would occur, and the purified water would return to the ocean. On a large enough scale this too could make the ocean less acidic, and remove carbon dioxide from the atmosphere. The byproduct of this reaction is hydrogen gas, which could be sold to offset its cost and the carbon footprint if the plant was powered by natural gas instead of renewables (which hopefully would not occur). As an added benefit, these carbonate rocks can be turned into as a carbon-neutral type of cement. However, with the sheer amount of rocks being produced, some would inevitably have to be released into the ocean, which would upset local ecosystems.

At scale, this type of technology has the potential to remove billions of tons of CO2 a year as well.

However this method is not without its risks as well, the impacts of taking large amounts of calcium and magnesium ions from the ocean could have an  impact on the overall chemistry of the ocean. The scientists behind this, believe it will likely cost 145$ to mineralize a tonne of CO2. As of now although a small prototype exists, there has been no experimentation in the ocean.

While alot of these technologies mentioned here have had little, if any, actual experimentation and many large risks, there are certain reasons to use the ocean as a carbon capture method. For one it is estimated that carbon is up to 50 times more concentrated in the ocean than in the atmosphere, so it is more effective to target the carbon in the ocean because you can get more of it out, in a lesser space. Also, while these technologies could damage the oceans significantly, the oceans will still end up severely degraded if they continue to absorb more and more CO2. Moreso, many of these technologies are relatively new, and as time goes on, solutions may be found to the problems they currently have. However, given the potential impact of these technologies, research on them must be carried out carefully  with  special consideration to marine ecosystems, or the solution has the potential to become just as bad as the problem.  While none of these technologies are a supplement, for cutting our  fossil fuel addiction, they certainly can help blunt the degree of warming we would face.

Also check out the IPCC report for a deep dive on ocean floor-based carbon capture.